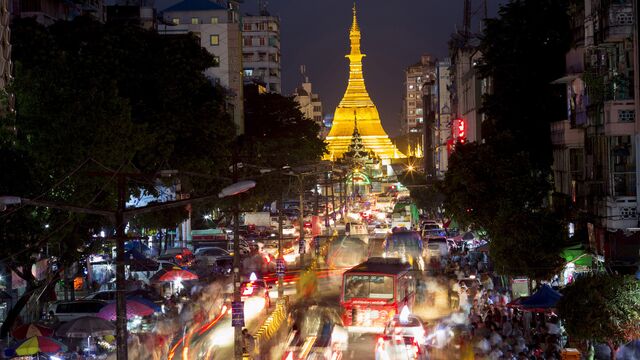 RIFAN FINANCINDO BERJANGKA – Myanmar’s central bank is braced for a deeper slide in the nation’s currency and has little scope to tackle the decline after the kyat fell the most in Asia, according to one of the monetary authority’s top officials.

The kyat has weakened about 10 percent against the dollar in the past six months, data compiled by Bloomberg show. The drop could deepen if the U.S. Federal Reserve increases interest rates this month as expected, said U Win Thaw, the director general of the foreign-exchange management department in the Central Bank of Myanmar.

“There’s no way for the central bank to intervene in the market,” he said in an interview by phone from his office in Yangon. “The depreciating kyat impacts on the economic stability of the country. Compared with other currencies, our drop is very rough at the moment.”The currency weakness has sparked a debate in Myanmar about whether officials should seek ways to stem the drop or let market forces find an equilibrium in an economy set for the world’s second-fastest expansion in 2016. Depreciation stokes inflation by raising the cost of imports such as oil, while boosting the outlook for exports ranging from natural gas to minerals. Currency swings can also make it harder for businesses to plan investment.

A period of global dollar strength and Myanmar’s trade deficit are among the reasons for the kyat’s swoon, U Win Thaw said in the interview on Nov. 30.

“If there are restrictions on some import items, the trade balance will be even,” he said, adding officials should scrutinize the purchase of luxury items such as foreign cars. “If the demand is reduced, there will be some stability.”

A lack of cooperation between ministries in the $65 billion economy makes it harder to frame a policy to respond to the kyat’s weakness, U Win Thaw said.

Myanmar moved to a managed float in 2012 to simplify the nation’s currency market and encourage investment. The slide in the kyat since early June is among the worst in emerging markets.

In contrast, the currency was Asia’s top performer during the first half on optimism about the transition to democracy under de facto leader Aung San Suu Kyi after a prolonged period of military rule.

Suu Kyi’s National League for Democracy party in November last year won the country’s first open elections since 1990. The government is trying to liberalize the economy and pursuing reforms such as deepening the bond market.

The U.S. eased sanctions on Myanmar after the elections in 2015, opening up untapped opportunities for foreign companies in a nation of 54 million people. Challenges include shifting regulations and an underdeveloped financial system.

The finance ministry and central bank set up a committee in October to scrutinize exchange-rate volatility, the Myanmar Times reported.

That was probably because of the pressure officials are under from some quarters of the business community, said Sean Turnell, an associate professor in the economics department at Macquarie University in Sydney and a special adviser to Myanmar’s government.

“A floating currency is exactly what Myanmar needs,” he said, adding an inflation rate of about 9 percent is another factor weighing on the kyat.

The IMF forecasts about 8.1 percent growth in the economy this year, the fastest in the world after Iraq. The volatility in the kyat threatens to make it harder to repeat the performance in 2017.

“There’ll be an impact on the Myanmar currency if the U.S. increases interest rates in December,” U Win Thaw said. “The kyat will depreciate again if they do.”(Mbs-rifan financindo berjangka)

Market Quotes are powered by Investing.com.