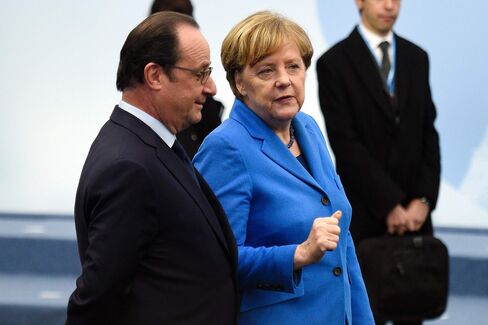 The German and French leaders do plan?a show of unity in the event of a U.K. vote to quit the European Union,?but it?s likely to be confined to a restatement of shared aims and values,?according to people familiar with the planning in Berlin and Paris.

For all the reassurances of recent days that the EU is prepared for the prospect of a so-called Brexit, there is no detailed program ready to be wheeled out on Friday, said one senior government official. Another denied the existence of any blueprint in a drawer, while a third said there is no guarantee other EU states would sign up to a German-French idea of unity in any case. All asked not to be named discussing their strategy.

In fact, several officials said a Brexit risks sharpening differences between Europe?s two main drivers. Hollande?s favored response, to push to strengthen the euro area with an expansion of shared risks, would run into immediate opposition in Berlin. Germany would rather the reaction was EU-wide.

?They don?t have the same priorities,? former Italian Prime Minister Enrico Letta said in a phone interview. ?Germany is dealing with refugees and France with its economy.? That raises the risk that ?nothing major will come out? of common efforts to re-establish EU unity until Germany has held general elections due in the fall of 2017, he said.

For more detail on what the first 100 days post-Brexit could bring, click here

The diverging views at Europe?s core suggest investors and Europe?s allies may fail to get the quick, forceful reassurances needed to avert political contagion and ease market turmoil. Terrorism and labor protests in France, surging anti-EU parties in both Germany and France and Hollande?s record-low popularity mean Europe?s presumed power couple has limited clout to impose solutions, even if Britons vote to stay.

It?s not for want of trying. The German and French leaders have discussed responses to a British vote to leave the EU on several occasions this year, according to two of the people with knowledge of their talks. They just haven?t agreed on a detailed strategy.

Merkel and Hollande first discussed a joint response over dinner in February at an Alsatian wine restaurant in Strasbourg, the French city across the Rhine river from Germany. They followed up in May at Verdun, France, where they?toured a World War I cemetery, a solemn moment meant to underscore how the push to unite Europe has turned former battlefield enemies into allies. It was there they discussed the crises at Europe?s periphery, to the south and east in Syria and Ukraine — and?in the U.K. to the north.

Demonstrations of common purpose aside, policy makers are stepping up assurances that EU leaders will craft a joint response at a summit in Brussels on June 28-29.

?I can assure that we will be ready and also very precise,? European Council President Donald Tusk said Thursday. German Finance Minister Wolfgang Schaeuble said Sunday that policy makers are ?well-prepared? to avoid any ?chaotic developments.?

This month alone, the French president has faced strikes, a terrorist killing of two police officers and fan violence at the European soccer championship being held in France. Merkel?s refugee policy is alienating voters and parts of her coalition after a record influx of asylum seekers last year, which galvanized the rise of the anti-immigration Alternative for Germany party. Her approval ratings are the lowest in more than five years.

?There isn?t much they can do,? Jacob Funk Kirkegaard, a senior fellow at the Peterson Institute in Washington said by phone. ?They are very restrained politically.? A main consideration for European leaders would be to ?play hardball? and try to make Britain?s divorce ?as painful as possible? to counter anti-EU forces in countries including France, where National Front leader Marine Le Pen is calling for an exit referendum, he said.

Germany and France have a history of differing views on Europe. Even within the government in Berlin, policy makers?disagree on whether Europe needs a pause in integration to keep it from unraveling, or a push for more.

For France, Brexit would be the signal to redouble Hollande?s push for closer ties only within the 19-nation euro area, creating a European core that increases France?s relative weight. Bank of France Governor Francois Villeroy de Galhau, who traveled to Berlin to brief German lawmakers on ECB policy in June, has repeatedly advocated a stronger euro area with the creation?of a central finance minister for the currency union.

Germany wants solutions to involve all 27 remaining EU countries partly out of concern that a Brexit would sharpen Europe?s fault lines and trigger further departures. The aim is to stem a power shift toward what Germany?s establishment views as Europe?s southern, fiscally shaky tier.

?Whatever happens, we?ll initially face an extremely dangerous, unstable situation,? said Gisela Mueller-Brandeck, a professor of international relations at Wuerzburg University. Instead of the ?reset? that Europe needs, ?months of volatility? lie ahead, she said. ( Mbs -?Rifan Financindo Berjangka )

Market Quotes are powered by Investing.com.